Many Norwegian children probably cried themselves to sleep on Sunday 14 August 2022. In the early hours of the same morning, the popular walrus Freya was killed on behalf of the Norwegian authorities.

After many years of experience as a walrus researcher in Greenlandic waters, I was spontaneously saddened by the news. Freya, in her naivety and seemingly unfounded trust, had turned to people to assuage her loneliness. In the wild, walruses are very social and are reluctant to act alone.

For most of the summer, Freya stays in Norway’s busiest port for pleasure boats, in the centre of Oslo. There she willingly posed to the delight of thousands of summer visitors. But for many, the idyll became nothing more than false love, like that of a “summer cat”. Freya’s execution was carried out early in the morning, apparently to avoid unnecessary commotion. Freya’s confidence was high and she became an easy prey.

The news of Freya’s death came as a surprise to me and most others because just three weeks earlier, in a televised debate, representatives of the agency argued strongly that Freya should be allowed to live. Immediately, a barrage of angry comments from uncomprehending and committed Freya-loving people was unleashed! During Freya’s solitary swim, which is thought to have lasted almost three years, this walrus girl, only four or five years old (Freya was not yet sexually mature), had made many friends in Norway, Denmark, Scotland, Shetland, Germany and the Netherlands. In March this year, she also became a tourist attraction at Smögen on the Swedish west coast, before returning to Norwegian waters in April, where she increasingly sought out humans.

But why was she finally killed by her new friends? The verdict on social media and from conservationists was virtually unanimous: this could only happen in Norway, the home of sealing and whaling. Barbaric, unpoetic and unnecessary! A smaller number of voices, including several walrus experts, also felt that the authorities had got it right.

– The decision to cull was taken after an overall assessment, where we concluded that human life and health could be at risk,” says Norwegian Director of Fisheries Frank Bakke-Jensen. The Director further refers to the fact that the authorities had ordered the public to keep a safe distance – but regretted that the rules were not respected. The blame for Freya’s death is laid at the door of nearby tourists. Bakke-Jensen also explained that walrus populations in Svalbard, where Freya is believed to have originated, are growing rapidly and are no longer considered threatened by experts.

But how dangerous was Freya? According to several reports, she often made threatening noises at approaching tourists and on at least two occasions she rushed at bathers during her stay at Frognerkilen in Oslo. The public also witnessed Freya killing a large swan and several ducks. It is known from the past that the huge tusks of adult walruses are regularly used as weapons in defence against each other and against enemies. In addition, wild walruses have been documented killing and eating large seals in Greenland. Inuit walrus hunters and many of us researchers who come into close contact with wild walruses through our work have experienced that walruses can attack to harm. Freya’s loss of her natural fear meant that she was often right next to where people were staying and, with or without intent, perhaps in a state of stress, could do the same?

Now, many are naturally upset about the killing of Freya, but what would the voices be like if she had, intentionally or unintentionally, come to harm or even caused the death of a human being? Freya’s short but pointy tusks were undeniably dangerous weapons.

It has been asked why Freya was not moved “home” to Svalbard. This would have required subduing, which in my experience is difficult in the case of walruses. The anaesthetic is a bad combination with stress, heat and the long transport. Such an operation could very likely have cost Freya her life. Sometimes there are no good solutions, only bad ones!

The current general perception is that walruses are distinctly Arctic animals that are dependent on ice. However, if we go back a few hundred years, we know for sure that walruses also lived as far south as northern Norway, Iceland and down the east coast of America. During a short period of very brutal hunting, thousands of walruses were killed, while a few animals probably survived in the northernmost areas where the perpetual ice prevented the boats of the time from sailing. When the walruses of Svalbard were finally protected as late as 1952, they had long been considered highly endangered. Today, we are pleased to note that walruses in Svalbard have reclaimed old habitat, that populations are growing rapidly and are no longer considered threatened. This may also explain a seemingly increasing number of sightings here in southern waters. Several experts also believe that the warming of the Arctic with shrinking ice may favour the distribution of walruses. As the ice disappears, animals will find new areas to feed. Warmer waters also cause greater biological production and thus more mussels, which are the main food of walruses.

Who knows? Perhaps walruses will eventually become common on our coasts too. We also know that climate change is disrupting the distribution of a number of other animal and plant species. Can we continue our short-sighted behaviour which until now has only been in people’s interests? What do we do the next time a walrus wants to take over our bathing areas?

The walruses are coming!

Most people associate walruses with the Arctic Ocean and eternal ice. So when the young walrus Freya was seen in a port on Smögen in March, many people opened their eyes. Two huge males have also been put near Stavanger and in Hammerfest on the northern tip of Norway. How unique is this? …
Reportage: Lars-Öivind Knutsen
Photo: Göran Ehlmé, Per Ole Halvorsen, Steinar Sannes, Lars-Öivind Knutsen, Marko T Wramén
Editor: Apollonia Meleouni
03:06

Walruses usually swim in the Arctic, but now a young walrus lies on a pier in Smögen and basks in the sun…
Text: Lena Scherman
Photo: Tommie Rekstad
Editor: Alexandre Gobatti Ramos 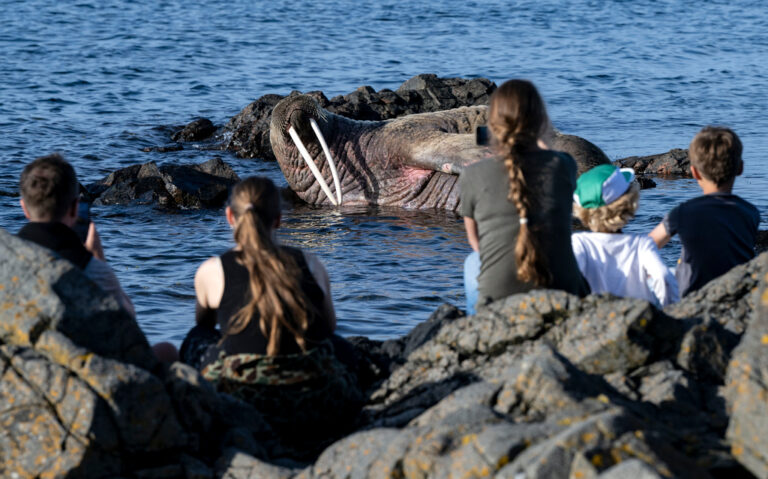 On the coast of Arild in Skåne, there is now a temporary attraction – a walrus is visiting. It may be the first walrus in Skåne…
Text: TT
Photo: Johan Nilsson/TT