After an eventful first week in the Galapagos (link to the first article), we are now heading west. We will investigate the waters around Fernandina Island in the western part of the archipelago. Here the water is significantly colder and the fauna are different. The cold, nutrient-rich ocean current comes all the way from the South Pole. It creates a completely unique underwater environment with corals and sharks but, unusually, also penguins and kelp.

Kelp is one of the main focuses of this expedition. Salome Buglass is a marine scientist at the Charles Darwin Foundation here in the Galapagos and a PhD candidate at the University of British Columbia. In 2019, on a previous Mission Blue Hope Spot expedition using the same DeepSee Submersible as on this voyage, she and Dr. Sylvia Earle found kelp growing at between 40-70 meters deep. It was an important discovery that received a lot of attention. But she has not managed to find it again. Now she wants to see if it was a limited occurrence or if there are substantial kelp forests here along the western part of the Galapagos.

On this expedition, deep diving on scuba is discouraged. We have been instructed not to go deeper than 30 meters, but Salome suspects that we need to get a bit deeper to find the colder water where the kelp thrives. We decide that Salome and I will make an attempt along the exposed western shore of Fernandina. The fact that no one has dived here before adds some excitement.

We get ready to go in at the deep end. There are big waves here and the water is relatively cold for being on the equator. All around us are marine iguanas, unique to the Galapagos. The water is clear and, on the way down into the depths, it reminds me of Norwegian coastal waters.

We follow a 30-meter curve to the south, and Salome swims fast. I can tell she’s excited. We swim a little deeper and all of a sudden she takes off. I follow and have the camera rolling. She stops at a small “bush,” takes her regulator out of her mouth and kisses it. It must be kelp, I think. The kelp I’m used to seeing is considerably larger and often found at shallower depths. Here we see a few small “bushes” of kelp. But we have found it, the fabled Galapagos kelp!

There is a big commotion when we get back to the research vessel. Everyone wants to look at Salome’s kelp. Sylvia Earle is an expert on algae and enthusiastically helps Salome to examine, press and preserve the samples.

Kelp is by no means the only subject of research onboard the M/V Argo. There is intensive activity with several research assignments. My colleague Simon Stanford joins  Dr. Susana Cardenas (Universidad San Francisco de Quito), who is tagging the endemic penguin found here in the western Galapagos. At the same time he follows marine scientist Jen Jones (Galapagos Conservation Trust), who collects water samples and looks for plastic particles in the water. The expedition leader Dr. Alex Hearn searches for the endemic and overexploited slipper lobster (Scyllarides astori).

Göran Ehlmé and I dive, and film, as much as we can, with three dives a day and often a night dive as well. The underwater world here on the western “wild” side of the Galapagos is absolutely outstanding. I’ve never seen anything like it.

The highlight will come on the last day, during the last dive. But I know nothing about that when I swim into a mangrove swamp. None of us know what lies ahead. What species are found in the waters here? Is it only seawater or will we encounter freshwater as well? Tui De Roy, a photographer who is onboard the research vessel, grew up in the Galapagos. She came here as a two-year-old with her Belgian parents in 1955. She is probably the person who has explored the wild islands here in the Galapagos the most. But even she has never swum up into the shaded waters of this mangrove swamp.

Low tide and strong currents forced the boat to drop us a little outside the reef. I have been swimming with my big camera, protecting it from sharp rocks and corals in the big waves. But now I’m in calmer waters. Visibility is limited and the water is still salty. It has been very difficult to get here. We swim further in, up small channels. It seems devoid of life. The only thing I see are turtles and white/yellow fish hiding in the shade under the mangrove roots.

It’s beautiful but a little spooky in here.

Whoosh! Where did that come from?

On my way out I encounter Sylvia Earle, 87 years young. She is absolutely incredible. Not only for her physical ability but mainly for her unquenchable curiosity. She still wants to be involved, see and discover. Very inspiring!

Punta Vincente Roca: On the northwestern tip of Isabela Island is this spectacular place, 4,000 meters deep along a volcanic rock wall exposed to the might of the entire Pacific Ocean without protective islands. Here we dive down the vertical wall. “Rain of fish,” I think while filming. The entire wall is covered in fish. Sardines by the tens of thousands, mixed with red cardinal fish. I stop, crawl into a narrow crevice and wedge myself there. Filming out into the blue. The camera lens is covered by fish that “rain” down the mountain.

Tens of thousands of fish move at the same time. And there comes a “torpedo.” A sea lion dives straight down through the shoal. Wow!

I continue swimming along the wall. Göran is in front of me. We’re heading to the corner. Here, the current is extremely strong but it’s also extremely full of life. On the previous dive I got caught in the strong current, which pushed me outward. I couldn’t get back. Now I stay closer to the wall. When I arrive, Göran is already there and I don’t want to disturb him.

I swim back — back to the fantastic wall with the “rain of fish.” This is the third (and last) dive. I know I have Göran behind me and Sylvia Earle in front of me. Stopping to film again, I have learned to press “rec” when I see a movement in the school of fish. Now the shoal moves outward and I press record. It’s just a turtle, but I keep filming anyway. The huge shoal moves outward, downward. And then suddenly all the fish are pushed inward, against the wall.

A giant orca comes up from the depths, just two meters from me. Shit, I hardly have time to think. But the camera is rolling. And I keep filming. The camera lens is again covered with fish – to be pushed away again! This time a sea lion emerges from the surface. Down through the shoal of fish and after the killer whale.

I stay in my crevice, exhale. Oh my God. I take a few deep breaths to calm myself. Did I get it? Did I have the camera on? Extraordinary! Orcas here in the Galapagos?

I swim on along the wall towards the boat. Göran should have seen it? Sylvia?

We come up to the surface.

“Did you see it?” The question comes from the boat driver. They had seen the orca from the surface.

What a last day, what a last dive. For me, that sums up this expedition. We’ve been able to follow fascinating marine research. I have learned a lot and at the same time managed to film the unique underwater environment here in the Galapagos.

It feels like a glimpse into the past. Is this how the ocean looked, not only here but in many more places around the world’s oceans? Fish school in large numbers, colors and shapes. Marine mammals hunt and thrive.

When we humans stay away, nature (the ocean) has shown an incredible ability to regenerate. Recreate what we humans are so good at destroying. Here in the Galapagos, you get the chance to see it with your own eyes. This is what life under the surface should look like. An indescribably positive image for a diver who for 30 years has become progressively more and more depressed… 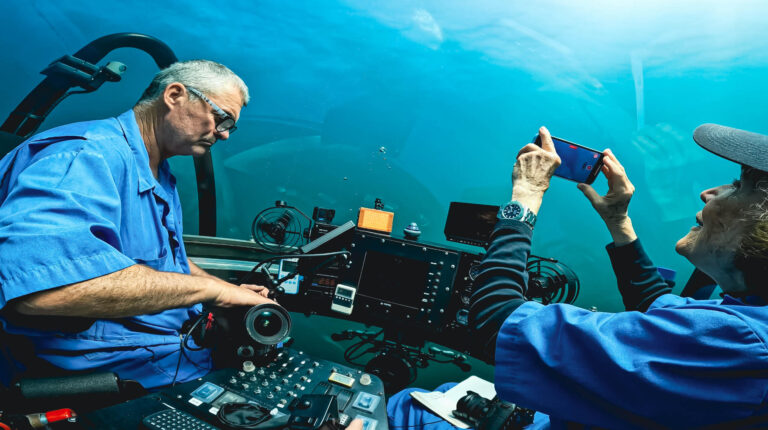 Important Ocean Science in the Galapagos

The challenges of wrestling fifteen flight cases loaded with film equipment and dive gear from Stockholm to the Galapagos islands are forgotten the instant we emerge from the airport into the sunshine of Baltra island…
Text: Simon Stanford
Photo: Johan Candert, Göran Ehlmé, Simon Stanford, Sylvia Earle 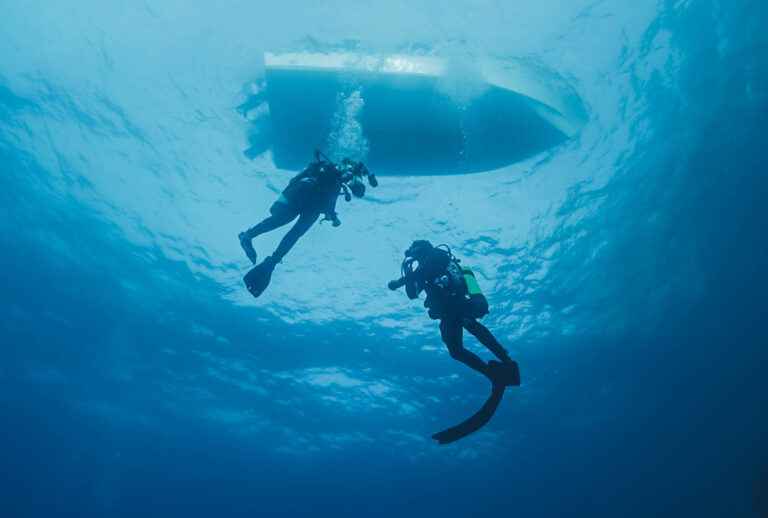 Deep Sea Reporter in the Galapagos

Legendary oceanographer, Sylvia Earle first visited the Galapagos Islands in 1966 and described it as, “the sharkiest fishiest place I’ve ever been.” In July 2022 we return to this special place on a research boat chartered by Dr. Earle’s Mission Blue foundation. The expedition is tasked with checking key environmental health indicators on the 25th anniversary of the Galapagos being declared a marine protected area…
Reportage: Simon Stanford
photo: Johan Candert, Göran Ehlmé, Simon Stanford
Editor: Helena Fredriksson