Killer whales are wrecking boats, and no one knows why

For the third year in a row, groups of killer whales have rammed sailing boats and chewed up their rudders along the coasts of Portugal and Spain. Mikkel Erichsen had his special rendez vous with the killer whales August 9th 2022. Sailing with his wife and three children, they had set out from Norway a few months earlier, ultimately destined for the Caribbean, and perhaps even longer. They had heard of the “attacks” from other sailors and had prepared themselves at least mentally, but so far, the sailing across the Bay of Biscay from Brest in France to La Coruña in Galicia in the northwestern corner of the Iberian Peninsula had been uneventful.

Mikkel Erichsen had been awake for the long night watch and slept late in the morning. When he got up, his wife was in the galley washing up and the children were playing and hanging out below deck. The boat was on autopilot, going approximately 6 knots in perfect and calm conditions. Still a bit drowsy, Mikkel Erichsen went to the deck and had a look at the sea, breathing in the fresh air when he saw a black fin approaching 100 meters away. Before he even had time to consider what to do, they all heard a loud bang and the boat shuddered as if it had hit a rock. For the next 30 and 45 minutes a small group of three killer whales repeatedly pushed the boat around, whacked the rudder or rammed the hull. Realizing that the crash had broken something in the steering Mikkel Erichsen called the coast guard to ask for assistance. The boat ended up being towed to La Coruña, where Erichsen found out that half the rudder was gone, bitten to pieces, or broken apart and the internal steering badly damaged. The skipper of the coast guard vessel estimated that he had towed around 40 vessels to La Coruña this season.

Since the summer of 2020 killer whales around the Iberian Peninsula have “attacked” sailing vessels; sometimes resulting in the boats having to be towed to the nearest harbor because of serious damages. In 2020 authorities in Portugal and Spain counted 51 incidences, where killer whales interacted with boats. A year later, in 2021, the number had more than tripled, as the authorities noted 188 incidences. A summary of the interactions between the killer whales and boats in 2022 has not been made yet, but a brief scanning of what people have already reported in various Facebook sites addressing this problem, indicates that the number continues to climb.

Scientists use the more neutral word “interactions” about the killer whales’ behavior to stress that they don’t know what is going on. Are the whales doing this for fun – playing and creating havoc just because they can – or are they deliberately attacking the boats to wreck them? Dr. Ruth Esteban is a whale scientist at the Madeira Whale Museum and has studied these whales for a long time, yet she has no definitive answer to the question. The killer whales belong to a very small sub-population of just 39 individuals that have specialized in eating blue fin tuna. They either hunt the tuna, pursuing them at high speed until they are so exhausted that they can be caught, or they go for a somewhat easier approach by picking them from the fishermen’s longlines.

In a recent scientific paper written with 14 of her Portuguese and Spanish colleagues Dr. Esteban sums up the current hypotheses for the whales’ disruptive behavior among boats. One idea is that it could have been triggered by what the scientists call an “aversive incidence”, an encounter gone wrong between one or several killer whales and a boat. For instance, boat collisions between whales and boats are not uncommon and have sometimes led to serious damage even death of the involved animal. Another hypothesis is that the combined stresses of living in an environment with ship’s noise, conflicts with fisheries and high levels of organic pollutants may also have led to the killer whales’ new behavior. The third suggestion is that the behavior is a result of the natural curiosity and playfulness of the killer whales. That even if the experience of being pushed around in a sailing boat and having the rudder wrecked is terribly frightening for the people involved in it, is it merely a playful event for the participating killer whales.

Dr. Esteban and her colleagues made no conclusion in their paper; they don’t know why the killer whales are doing this and there is not enough data to support one idea instead of another. The authors do note however, that killer whales are fast learners, and that new behavior in killer whales is often transmitted socially to other animals in the group. And indeed, it seems that more killer whales in the area have picked up this behavior since it started. Initially only three individuals were engaged in the interactions; by the end of 2021 at least 14 individuals have been seen interacting with boats.

The killer whales have “attacked” many kinds of boats, but single hull sailing vessels have been attacked more often than catamarans, fishing vessels and different kinds of motorboats. There is no number for the ratio between these different kinds of boats in the area, so it could be that they are more often targeted because there are more of them. Approximately half the boats that experience an “attack” will suffer some sort of damage, and of these roughly half will sustain serious damage, typically a destroyed rudder or steering mechanism.

In a protocol worked out by the authorities in Spain, Portugal, and France the boaters are advised to turn off the engine or take down the sail, switch off the autopilot and stay away from wheel if killer whales are interacting with the boat. The safety protocol also states: Do not yell at the animals, do not touch them with anything and do not throw things at them.

But not all boaters think it is enough of a deterrent to stop their boat and the discussion in various social media groups reveals that several potentially dangerous steps have already been taken by some skippers to scare the killer whales away. These include reversing the engine, throwing fire-crackers and so called seal bombs in the water and pouring diesel or chlorine in the water.

The sinking of a Portuguese sailing vessel by killer whales July 31st 2022 has only increased the fear and anger among boaters. The incidence happened in the darkness around midnight and the terrified people onboard the vessel had to abandon ship and go into the boat’s life raft. They were saved by a nearby fishing boat and brought to the nearest town, Sines on the Portuguese west coast.

The conservation of this small and endangered population of killer whales is a big concern if the situation continues to escalate. The safety of the people in boats is of course a concern too and in Spain authorities have at times banned smaller boats from operating in certain areas to dampen the interactions. The scientists are calling for dedicated research to help understand the behavior and suggest how it can be prevented.

For Erichsen the involuntarily break in his family’s journey while the rudder on their sailing boat was being repaired, has given him time to consider his relationship to killer whales. He used to think they were beautiful and fantastic. He still thinks they are just that, but he has added the word “dangerous” to the list.

Puzzling, unheard of and scary are the words that best describe my reaction to the interactions between killer whales and boats in Portugal and Spain. The latest three- or four-decades killer whales have gained an almost world-wide reputation as “gentle giants”, completely opposite to how they were perceived earlier. Not only has there never been a documented attack leading to the death of either a diver, a fisherman, a sailor, a surfer, or a swimmer in the wild, everybody who is around killer whales often will probably testify that the whales either ignore people or are curious – and nothing more.

Studying killer whales Norway, I have often had the thrilling experience of being near them. They have come to the small RIB I was working from, sometimes poking their head up beside it or swimming under it. Once a killer whale even pushed the boat, but I have never been frightened. My first thought therefore was that this was some kind of rough play and I still think that this is a plausible explanation. Killer whales learn fast, and a new behavior can easily become the “new fad” among whales belonging to the same social group. It is also possible, maybe even plausible that people if they have reacted strongly by yelling or screaming have reinforced the behavior the same way that training of animals works. If they find out that there is a reaction, they keep doing it.

On the other hand, I don’t think it can be ruled out that some of the experiences the killer whales around the Iberian Peninsula have had with boats can have triggered this new disruptive behavior. Perhaps an animal was injured or died from a collision or other kind of accident with a boat or perhaps the combined stresses of living in an environment that is almost completely “taken over” by boats and ships.

Out and scare whales

We are going to the northern Norwegian fjord Kvänangen approximately 20 miles north of the Arctic Circle. Fishing boats from all over the Norwegian west coast come to this particular fjord during some intense winter months to fish huge amounts of herring. But there are also other creatures that want the herring. In addition to a number of predatory fish and gulls, an unusually high number of killer whales and large humpback whales have also become increasingly numerous. Sometimes there may be conflict…
Reportage: Lars-Öivind Knutsen
Photo: Lars Öivind Knutsen, Roberto Lo Monaco, Göran Ehlmé, Simon Stanford, Anders Kronborg
Editor: Apollonia Meleouni, Alexandre Gobatti Ramos 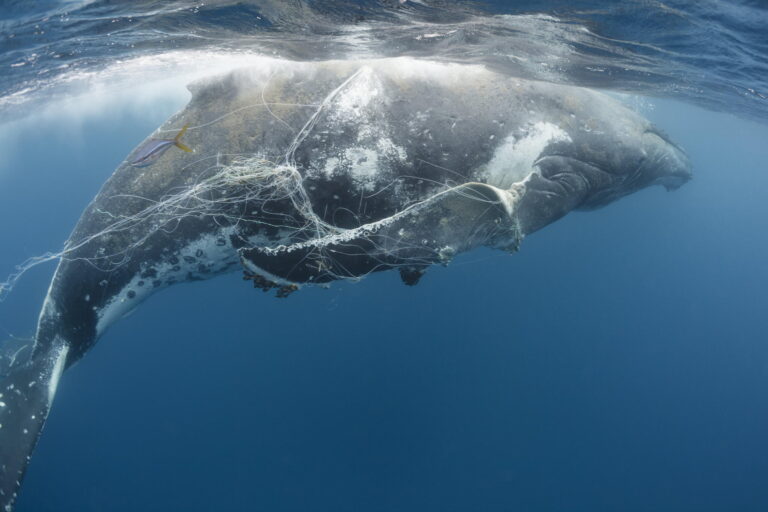 Requirements for protected areas for whales