Despite decades of extensive action, the Baltic Sea remains one of the world’s most eutrophicated seas. Excessive algal blooms year after year, and levels of phosphorus and nitrogen in the sea remain as high as ever. Yet less nutrients are leaking from agriculture and sewage than ever before.
Perhaps there is a source of eutrophication that scientists have missed.

Behind the brick and glass building of the Swedish University of Agricultural Sciences in Uppsala, between busy thoroughfares and the River Fyris, hides a well-kept park environment with plantings, paths and benches, the Knowledge Garden: a study object for students of landscape architecture. Further down to the river, behind a high green oxel hedge, a lush garden with willows, rhododendrons and chestnut trees. It smells like a botanical garden and in the middle of the park a pond with water lilies. This is where future park designers learn how to make green spaces attractive.

In the park, we meet Helena Aronsson, who has long been researching how agriculture and human activity affect the aquatic environment. An area in which she is one of Sweden’s leading experts.
Don’t you get discouraged? The Baltic Sea does not seem to be recovering – despite all the research and action? we ask at the outset.

– On the contrary. It’s inspiring. Otherwise I wouldn’t be working on this. The tangible interaction between researchers, farmers and other stakeholders in the agricultural sector is interesting and rewarding. And we all want sustainable development. There is growing momentum around the issue of sustainability in agriculture.

Eutrophication is the biggest and most pressing environmental issue for the Baltic Sea, even today. And agriculture is still the main source of nutrient emissions. This is nothing new,” says Helena Aronsson.

– We had something called the Green Revolution after the mid-20th century. Back when we had artificial fertilisers and plant breeding, and we had plant protection products which were an incredible development for agriculture and humanity. All of this is a prerequisite for our being able to be so many people around the Baltic Sea and live without starving. But it also affects the environment, of course.

Virtually all the nutrients that end up in the Baltic Sea come from the rivers, streams and creeks that flow out of the surrounding landscapes. The Fyris River outside the park where we are sitting, for example. About a third of it happens naturally because we have a wet climate,” says Helena. Nitrogen and phosphorus are naturally present in the soil and are washed out with the autumn rains. But about 35-45% of nutrient inputs come from agriculture. Wastewater is another important source. And Helena adds that nitrogen is added by combustion processes, as air falls on the water. And industries add some. But agriculture is, by any reckoning, the biggest source.

A growing population around the Baltic Sea, currently around 85 million people, means increasing demands on supplies and food. The fields are cultivated with various crops that are fertilised and harvested to become food or feed for cows, pigs and chickens around the Baltic Sea. Farming and livestock production cause nutrient pressures that flow through waterways into the sea.

– ‘The best thing would be for it to grow all year round,’ says Helena, ‘so that all the nutrients were taken care of before it was washed out to sea. Like here in the park around us. Chestnuts and willows use nutrients here. It’s growing like crazy. Or forests all over Sweden, and in all the countries around the Baltic Sea. Then we would have no eutrophication, just the nutrients that come naturally.

If people with wants and needs were removed from the system, the matter would be settled. But that’s not possible, says Helena – not disappointed, but somewhat discouraged, as she herself is part of the impact on the Baltic Sea.

– Eutrophication affects the entire ecosystem, with negative consequences that affect life in the Baltic Sea. It affects the recreational environment for us, including algae blooms and gooey bathing water. But the main problem is that excessive growth of algae causes sediment to settle on the bottom, which leads to a lack of oxygen when it decomposes, resulting in oxygen-free bottoms. The water becomes turbid, and the entire species composition is affected. The ecosystem is disrupted.

More than ten years ago, ministers around the Baltic Sea decided on a joint action plan for the sea, in the framework of the Helsinki Convention, Helcom. The aim was to achieve a balanced sea state and good status by 2021. That goal will not be achieved. An update of the action plan is therefore underway.

Measurements reported annually to Helcom, including by Helena Aronsson’s research groups at SLU, show that nutrient levels in the major estuaries are actually declining. Today, nutrient inputs are down to 1950s levels. The problem is that the state of the sea is not changing significantly. It’s the same soup and the same eutrophication – year after year.

– We know that there is a lot stored in the sediments, old sins, that explain why it is not getting better. It can take between 25 and 50 years for it to wear off. Patience is the key if you want to wait for improvements.

Helena describes a major educational problem. For farmers, work is about the here and now, producing for the survival of the farm. Harrowing, sowing, fertilising and harvesting. When their efforts don’t seem to make a difference, motivation fails. Expensive and cumbersome environmental measures that do not lead to measurable improvements are discarded if they are not supported. – There are enormous expectations. Many ask: are we seeing things improve now? When immediate results are not forthcoming, it is difficult to understand why one should continue. And just as difficult to work to reduce phosphorus leakage on a farm, when phosphorus leakage may be zero to two kilograms. It means nothing to the farmer from a production point of view, but it means a lot to the lake next door. Therefore, the farmer’s knowledge and understanding of the importance of measures is important. In Sweden, we work a lot with advisory support and training of farmers, and we see that it works. This is where we researchers have an important role to play in communicating our results.

What are the most important actions now?

– It is to manage manure from animals in a good way. We have worked a lot with advice, as a complement to regulations. We have a tradition in Sweden of encouraging knowledge and personal responsibility, we don’t work so much with rules and strict directives. That’s what we do to agriculture too. Supporting farmers through advice and training. How should I handle manure on my farm, with my animals? But then it’s also important to look at how you grow. It’s good to keep the land covered with vegetation and not to cultivate so much in autumn. There are some important things we need to do to optimise cultivation, so that it works to produce and still take environmental considerations into account.

Are there unknown sources of eutrophication?

– That’s one thing that has come up. Our urban agricultural landscape is increasingly being replaced by a horse landscape. Horses are good in many ways, providing ecosystem services both for us recreationally and for the landscape. But they spread manure, like other animals, which can affect the aquatic environment. It is a question that is much discussed now. This may be a source that we have not included in the source apportionment analyses, when explaining where all the nutrition comes from. These are winter pastures that are trampled, where the ground is bare. Where the nutrients are just piled up and risk leaking out if they are not moistened. But awareness is now growing among horse owners on this issue, and we are contributing knowledge to move the issue forward.

Several marine scientists point out that eutrophication will decrease and become less of a problem within 30 years. In the long run, we are on the way to a sea with reduced eutrophication, but it will take longer than we would like. Certainly, the situation would be much worse than it is today if we had not taken the measures that Helena Aronson and others have been working on. The Baltic Sea had been beyond saving. Smelly, constant algae blooms and saturated with hydrogen sulphide that consumed the oxygen supplied. Yet there is hope and expectation that, if the measures now being taken continue, the sea will be healthier than what we have around us. We are moving in the right direction, the question is how far we will get. And if we have to learn to live with a flooded sea.

– It’s slowly getting better, but sometimes you wonder: is it possible that it will be completely fine? The Baltic Sea is a sensitive and confined sea. It has been flooded for a very long time. We have climate change, which affects us by increasing the flow of water into the Baltic Sea, and it also affects us in other ways that we may not really know today what will happen. But we also see that it is getting better. Patience and persistence are what will eventually give us a healthy sea. 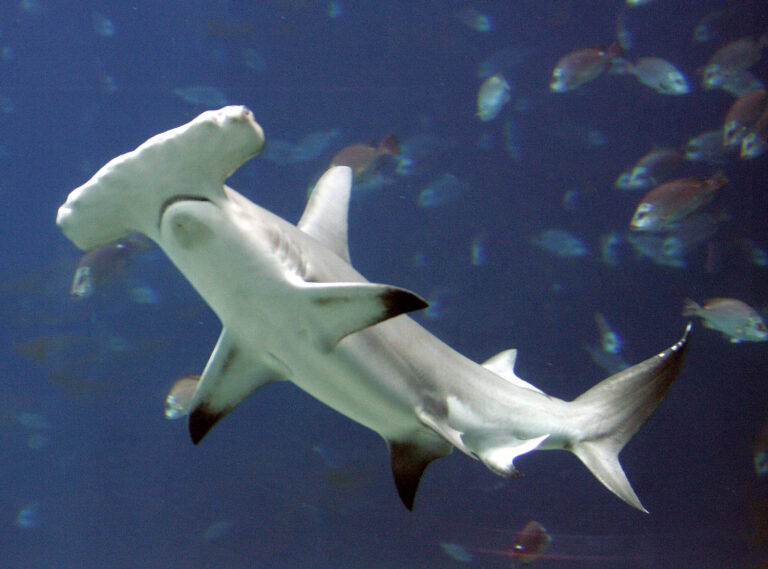 Heavily reinforced protection for the sharks, as well as turtles, lizards and frogs. But the nob is taking action against the trade in hippos. These are...
Text: TT Nyhetsbyrån
Photo: John Bazemore/AP/TT
Climate and Environment
SharkPanamaHunting
04:38

In the marine nature reserve Garajau off the coast of Madeira, Elvis swims. He is around 40 years old, weighs 70 kilos and is one...
Reportage: Lena Scherman
UW-Photography: Johan Candert
Edit by: Alexandre Gobatti Ramos
Climate and Environment
NaturreservatMadeiraGrouperGarajau