The fact that the oceans store carbon dioxide and heat is something that has attracted more and more attention in recent years. Today, scientists estimate that the oceans take up 26 percent of the carbon dioxide we emit, and the oceans’ ability to sequester carbon has been described by scientists as an important component in stopping global warming. Now it has been proven that even fish poop plays an important role.

According to a new study published in Science Advances, fish poop contains a high concentration of nutrients, but also a lot of carbon. Daniele Bianchi from the University of California is one of the authors:

“Research has historically had a tendency to focus only on the ability of microorganisms to bind carbon dioxide and produce oxygen, but we have not focused as much on the ability of larger organisms to absorb carbon. We already knew that fish poop actually contains high concentrations of carbon.

Therefore, the researchers decided to investigate this more closely and see how much carbon is actually stored, globally, in the commercial fish species.

“We know approximately how much the fish poop, how much carbon it contains and also how quickly the faeces reach the bottom. Against this background, we therefore wanted to investigate how much impact commercial fishing has on carbon storage in the sea.

How good the fish poop is at storing carbon depends partly on how deep the fish swim, but also on how “firm” the stool itself is.

Using statistics from, among others, the UN Food Agency (FAO), the researchers calculated that fishermen’s faeces store 900 million tons of carbon every year. Since commercial fishing started, fish stocks in the world’s oceans have decreased by 50 percent, which means that the amount of carbon stored at the bottom of the ocean has also decreased.

“It is important to know that all fishing will have its impact on biomass in one way or another, and I am not the one who calculates the cost or benefit from fishing. But I would say that our study highlights how important it is to also think about the ecosystem services life in the ocean provides us.

Daniele Bianchi is also careful to point out that there are some pitfalls in the study, which he wishes future research would examine more closely. For example, many of the commercial fish are also predatory fish, which eat other fish.

“What we haven’t calculated is what happens to the fish lower down the food chain. Do the smaller fish compensate for carbon sequestration in any way? We don’t know that today.

Even whales’ feces are important for the sea

Believe it or not, this poop study isn’t the first of its kind. In 2019, a study showed that whales’ feces also affect ocean ecosystems.

“What makes the whale’s fecal matter interesting is the amount of nutrients that are there. Whales travel very long distances and during this journey they have time to absorb nutrients from a variety of places.

Bianchi brings up the South Pole as an example where whale feces can play a crucial role in the ecosystem. But then the whales, unlike the fish, should defecate at the surface.

“In Antarctica, for example, the amount of iron at the surface of the water is very low. But if a whale has then eaten at a depth where these nutrients are present, or brought it with it from another ocean, then that feces can sprinkle some iron in an ecosystem that otherwise wouldn’t have had it. And this, in turn, provides an increased production of phytoplankton, i.e. algae.

The more algae there are, the more food there is for crustaceans and krill, which many fish, in turn, like to eat.

The amount of fish affects the chemical composition of the oceans

For the oceanographer, the two studies provide an overview of the grayscale of the marine ecosystem.

“If you want to store as much carbon dioxide as possible, then you would have liked all animals to go down to the seabed to get rid of their food. But if that had been the case, we would have lost a large amount of nutrients on the surface, and we know that the ecosystem needs them to function. So it’s complex, but that’s also what’s the beauty of biochemistry.

Daniele Bianchi says that during the research, he and his colleagues realized that there are very detailed studies on specific types of fish, but that the overall research on fish is very low.

“For me, it is clear that we need a better understanding of how our fisheries affect the chemical composition of the oceans. Now we may understand in a new way that it can be an advantage for man to have a certain amount of fish left in the sea. I therefore hope that several researchers will investigate this so that one day we can keep it in mind when making decisions about how we manage our ecosystems. 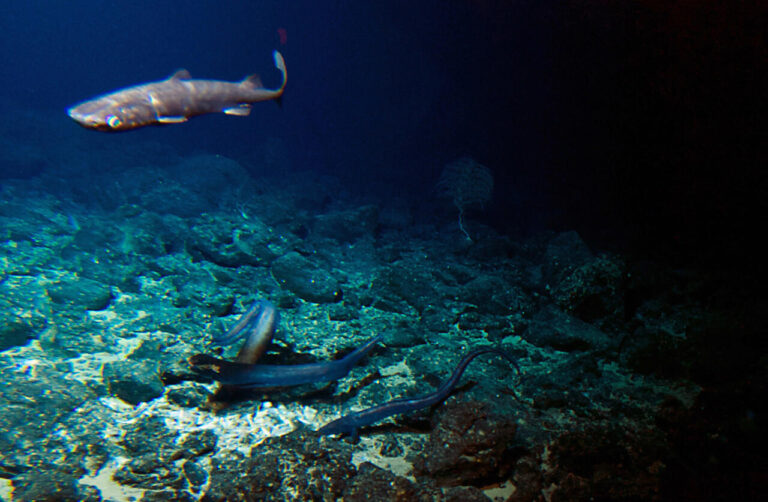 Soon a decision will be made about mining at the deepest bottom of the world's oceans. Major stakeholders are in the starting blocks...
Text: Martin Mederyd Hårdh/TT
Photo: Caleb Jones/AP/TT, JAMSTEC/AFP/TT
Graphic: Anders Humlebo/TT
Research
ResearchSeabedPacific Ocean
07:48

In the ReCod project in Ar on Gotland, they have now succeeded in getting cod to spawn in captivity. This by trying to imitate the...
Reportage: Leif Eiranson
Editor: Apollonia Meleouni
Research
CodfishingReCodvideo reportage
03:24